ODYSSEY® Batteries represented at King of the Hammers

King of the Hammers Background

This February, thousands of people will spend nine days in Johnson Valley alongside the Means Dry Lake bed in California to watch some of the finest off-road artists compete to win “the ultimate desert race.”

What is this place? It’s known as Hammertown – home to King of the Hammers (KOH).

The idea for the race began on a bar napkin. Dave Cole and Jeff Knoll invited twelve friends to an off-roading adventure through the desert one day in 2007. No instructions, no spectators, no vendors; just a group of guys racing through a 35-mile stretch of desert obstacles.

The race has grown exponentially since its initial run – from twelve teams racing for bragging rights – to more than 300 teams competing in front of thousands watching both in person and online. KOH now features a series of four races leading up to the biggest, including King of the Motos, King of the UTV, The Every Man Challenge, a new ULTRA4 vs. Rock Bouncer shootout and, finally, KOH. It is a must-see combination of desert racing and rock climbing – both technical and thrilling.

ODYSSEY® batteries have made appearances throughout the years at KOH and 2016 is no exception. We are proud to sponsor several athletes and vehicles at various levels of the competition. It is a week we look forward to every year as we cheer on the rigs that are home to ODYSSEY® batteries.

His introduction into off-road racing originated in the desert. It’s only natural that Greg Adler has spent the last seven years returning to a place embedded in his DNA. This year is no different – Adler will be competing in his eighth KOH. 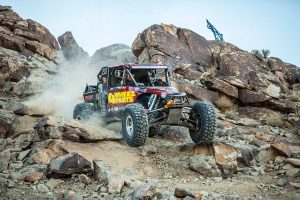 “This has become one of the largest gatherings of off-roaders in the country and while the races themselves are the highlights of the week, the open desert and spectacular trails attract countless wheelers who make the pilgrimage out to Johnson Valley each year for Hammers,” said Adler, president and CEO of 4Wheel Parts. “We are all looking forward to the 10th anniversary of this incredible event.”

Adler rose up the ranks, beginning with co-driving in Class 7 to working his way toward a Class 8 Full Size truck. He’s also competed in Pro 2 and Pro 4 classes in short course competition. Now, he’s returning to Hammertown once again.

This year, Adler and his team made changes for the #210 ULTRA4. The rig features a new body, built to resemble a Jeep® JK. There is also a brand new custom Warn high-speed winch along with a new BFG competition tire.

These adjustments reflect changes in the sport that require cars to handle great speed over the desert while simultaneously retaining a drive system that can handle slow speeds for the unforgiving obstacles over rough terrain.

So why did Alder fall in love with off-roading? His extremely competitive nature combined with the thrill of off-road races. The sport combines high-speed racing in an open desert with technical aspects such as rock crawling. It also gives his company a platform to showcase many of their products in the most extreme environments. 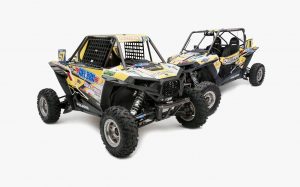 Mitch Sr. found himself at the forefront of the 1990s rock crawling craze. It wasn’t until 1999, though, that he began competing in professional events for the sport. Mitch Sr. continued to compete for six years, winning the Pro Rock Championship in 2004. Now, he races as a factory Polaris driver in King of the UTV, winning six out of the seven years since its origination.

At just 18 years old Mitch Jr. has followed in his father’s footsteps. He began racing the CORR series short course at age 11, followed by the Lucas Oil Off Road Racing Series in 2008. Mitch Jr. progressed from the Stock class to Modified Cart class quickly, where he was a regular on the podium, with 2011 being his last season. In 2012 he began racing UTVs in the WORCS Series, where, in his rookie season, made the podium five times including one win. He has also raced in the Soboba Grand Prix, the Lucas Oil Off Road Racing Regional Series, The Dirt Series and a SST UTV race.

You can find the father-son duo at this year’s KOH, as the team looks to add another win to the family name.

Todd Romano is returning to KOH for a second year in a row. He will be racing alongside his Artic Cat teammate, Robby Gordon, in King of the Motos and King of the UTV.

Romano’s King of the Motos vehicle is the first of its kind at the event. He is waiting until race day to unveil the new bike, but assures it will be worth the wait. For King of the UTV, Romano will be driving a Robby Gordon Speed Limited Edition Wild Cat X. It features a new trail arm, front approach angle design and custom winch mount by Warn. Romano has a third vehicle in the works – a Randy Slawson Bomber Chassis with an Armarda Engineering IFS front end. If completed in time, it will be a last minute entry into the ULTRA4 KOH race.

“Racing has allowed me to experience every aspect of the sport, and today fighting for the win is the most exciting part of what I get to do,” says Romano. 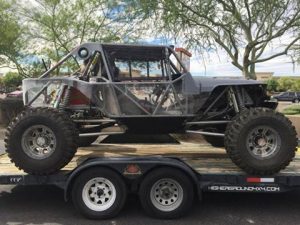 Racing in Vera, some 5500 miles from home, a purpose made modified class (4500) ULTRA4 racer. Her name in Italian means “Strong Woman,” and the team at ACE Racing is hoping Vera lives up to it at the 10th annual KOH.

She is the product of Andrew McLaughlin from LetzRoll Offroad – Alan Johnson’s old 4511 car. Ace Racing has commissioned the LetzRoll team to carry out the work on fully equipping Vera for the event. “European” upgrades have already been made including a Gigglepin twin motor winch along with a pair of our ODYSSEY® 78-PC1500 batteries. She is scheduled for a few more upgrades, along with a new ACE wrap before setting out for the desert. Pier won the ULTRA4 Europe’s King of the Valleys race back to back in 2012 & 2013 and is looking to podium in the modified class at King of the Hammers in 2016.

EnerSys, in support of ODYSSEY® batteries is proud to sponsor athletes and supply teams with batteries to help them power through any terrain. Make sure you check out Greg Adler, the Guthrie team, Todd Romano Pier Acerni and his ACE Racing team as they take on the ultimate desert races.