A Quick Lap Around the Track with Brad Keselowski

ODYSSEY® batteries is a proud sponsor of Brad Keselowski as he looks to gear up for another great season behind the wheel for Team Penske. He is the 2012 NASCAR Sprint Cup Series and 2010 NASCAR XFINITY Series Champion and has been an integral part of securing three consecutive XFINITY Series Owners’ Championship titles. We took a lap around the track with Brad Keselowski as he geared up for the start of NASCAR season at the Daytona 500. Hear what a key athlete of ODYSSEY® battery and Team Penske has to say.

What was it like to grow up in a racing family and how do you think it impacts the way you approach your career now?
Highest of highs and lowest of lows – will never forget it.

Who’s made the biggest impact on your racing career? Did that person give you any advice you still follow to this day?
My dad – he got me started and told me to work hard. I like to think that his words have helped me get to where I am today.

What makes NASCAR different than any other sport?
The “car” dynamic.

You won the Nationwide Series Most Popular Driver award three consecutive years in a row: What do you do to connect with your fans year after year?
Social media and attending many at track appearances.

What do you consider to be the biggest achievement so far in your career?
No doubt the 2012 NASCAR Spring Cup Series Champion. It was a magical season and I’m hoping to do it again in 2016. 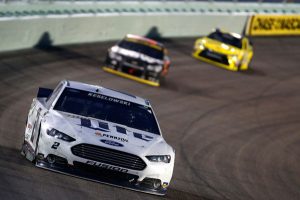 What’s different about the way you’re preparing for Daytona this year compared to years past – or do you have a ‘ritual’ in prepping for your races?
No difference, really. Maybe a few less laps of practice in the off season compared to the last few years, but the biggest advantage is that each year I enter this race with increased experience.

How would winning the Daytona 500 compare to winning any other race?
It’s hard to compare the 500 to any other race because it’s the biggest race of the year – it is in a category all by itself. It would by far be the biggest win of my career and I hope I’m fortunate enough to put my name in the record books before I retire from racing.

We thought it’d be fun to do a little Daytona trivia, so here goes (no Googling allowed!)

What made you decide to start your own racing team? How has that experience been?
I’ve always been around racing, especially in the Truck Series. My family had their own race team growing up. I remember working on the trucks and traveling to the racetrack from a young age, so I guess you could say family lineage and desire to make the sport better. It’s been a very rewarding and challenging experience at the same time. We recently opened up a new facility in Statesville, NC and are looking forward to fielding two full time teams this season.

What was your favorite part about being “on the other side of the track” as a NASCAR on FOX analyst for many of the XFINITY Series races?
I think my favorite part of calling races in the booth is that it offers a fresh perspective. I’m able to pay attention to so many other things besides just the car I’m driving – tire falling off, fuel & pit strategies, preferred lines on the race track and other elements that really help in my approach for the race on Sunday.

Can you tell us what it was like to be in the third Sharknado movie alongside Joey Logano?
I’ve never been eaten by a shark before so you could say that it was very interesting. I enjoyed seeing how each scene they shot was put together to make the final cut. Too bad I won’t be in the next one, though.

So, between owning a racing team, being an analyst for the XFINITY Series and being in a movie, which one would we most likely find you doing after your racing days are over?
I’m fortunate to have some options when that day comes. The one I will get the most satisfaction out of will be owning a racing team. There isn’t much that can compare to that.

Outside of racing what are some of your hobbies?
Like many drivers, I enjoy videos games in my spare time. One thing that might surprise a few people is that I enjoy playing croquet as well.

If you could race against anyone – who would it be and why?
Great question, there are so many drivers that I would love to race against past and present. If I had to pick one it would have to be Dale Earnhardt. To be the man, you have to beat the man.

Be sure to find Brad Keselowski on Twitter (@keselowski) and Team Penske (@team_penske) for updates!