In 2015, Joey Logano made history at the Daytona 500, becoming the youngest driver to ever capture the checkered flag in “The Great American Race.” Since then, he has continued his success on the track, racking up 17 wins.

As an official partner of Team Penske, EnerSys® is proud to help power Joey Logano as he gears up for another big run at Daytona in a few weeks. We recently caught up with #22 to talk about what drives him on and off the track: 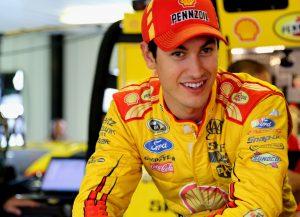 You began racing back in 1996 – what drew you to the sport/how did you get started?
I got my first go-kart when I was six, and from then on I was hooked. Fortunately, I had a talent for driving, and was able to put all my eggs in that basket. So far it’s worked out well.

Youngest Sprint Cup Series winner, 2009 Sprint Cup Series Rookie of the Year 2015, Daytona 500 winner and 2016 NASCAR Sprint All-Star Race winner are just a few of your accomplishments. How have you found success?
I credit my success to hard work and chemistry with my crew chief, Todd Gordon. Those two things have been the cornerstone to a majority of the Cup success. Todd assembled a great team; those guys give 110% all year. When the chase starts, they find another level. It’s a team sport and I’m thankful to have a great one.

What will it take to win the Daytona 500 again this year?
A fast car that drafts well – that’s critical each year. My spotter Tab Boyd will have to be on his toes all day, finding holes, and giving me information about what line has the momentum. We’ll need solid pit stops all day because you don’t want to lose track position at Daytona. It’s typically a lot harder to get back than at Talladega. I’ve got the team to win a second Daytona 500 for sure. Most of them were on the team when we won the race in 2015.

Is there a particular race you always look forward to racing?
The next one! There aren’t many races I don’t look forward too. New Hampshire is one of my favorites because it’s home. Bristol is an incredible stadium atmosphere in the day and night, and I’ve been fortunate enough to win there a couple times. Kansas is a track that seems to suit my driving style and we’ve had success there. I’m just really fortunate to drive racecars for a living.

Outside of racing what are some of your hobbies?
Driving! I love cars, especially older, unique cars. I also enjoy spending time at home, especially on the lake with my wife and dogs. We’re gone so much over the course of a season that it’s just nice to be able to enjoy some time at home.

What would you be doing if you weren’t racing?
I’d be in big trouble! I put all my eggs in that basket when I was young and thank God it’s worked out. I ran a Zamboni when I was younger, I could do six-minute ice cuts so maybe that, thankfully racing worked though.

Greatest accomplishment so far?
Starting the Joey Logano Foundation with my wife Brittany. It’s been such an eye-opening experience for both of us. There are so many kids trapped in circumstances – no fault of their own – that just need a second chance at life. Winning races is an incredible feeling, but nothing like the feeling you get when you’re able to help someone out of a bad situation. A bad day at the racetrack really isn’t a bad day when you compare it to what so many people have to go through on a daily basis. 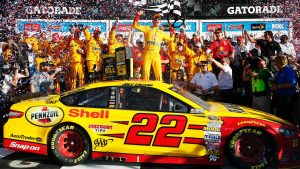 For more information on EnerSys® and its full line of products, systems and support, visit www.enersys.com.