EnerSys® to Host Motorsports Personalities at its 2017 ODYSSEY® Battery SEMA Show Booth No. 24875

“Over the past 20 years, ODYSSEY® batteries have found their way into more and more racing applications across various motorsports series,” said Maria Orlando-Krick, marketing content and sponsorship manager at EnerSys. “The harsh racing conditions that championship-caliber racers like Tanner Foust and Brian Deegan face, and the demands they put on their equipment, show that the strength and durability of ODYSSEY® batteries are just what’s needed to take an off-road adventure to the next level.”

Following is the current schedule of appearances at the ODYSSEY® battery booth:

Road Hauks, led by designer Kenny Hauk, is a Pennsylvania-based company that melds the characteristics of luxury cars with off-road vehicles. The series profiles Hauk and his crew of mechanics and fabricators as they work to build one-of-a-kind vehicles that satisfy people’s thirst for both form and function, creating machines that look good and can go anywhere. Road Hauks airs on The History Channel.

Rutledge Wood is the official brand ambassador and celebrity spokesman for EnerSys and ODYSSEY® batteries. Wood is a specialty motorsports reporter and NASCAR analyst for NBC Sports.

“The General” Brian Deegan has 14 X Games medals to his name and is the most decorated motocross rider in the competition’s history. This freestyle motocross icon, off-road champion and rally car gold medalist is the 2014 Lucas Oil Off Road Racing Series (LOORRS) Pro 2 Champion, 2013 LOORRS Pro Lite Champion and 2013 Dirt Sports Driver of the Year.

Hailie Deegan currently competes in the Lucas Oil Off Road Racing Series (LOORRS) in the Pro Lite class. Deegan won the LOORRS Mod Kart Championship in 2016. She was recently named to the nine-member NASCAR Next Class and has plans to eventually race in a NASCAR Series. Hailie is the daughter of action sports legend Brian Deegan. 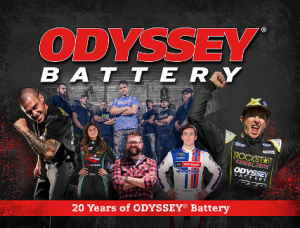