Chris Forsberg: Drifting to the Top of the Podium

Over the last thirteen years, Chris Forsberg has attended every round of Formula DRIFT. That dedication and perseverance is why he’s consistently named one of the best in the sport.

Since 2003, Chris has powered his Nissan 350z and 370z exclusively with ODYSSEY® batteries.

We recently talked with Forsberg to find out what powered his drive to succeed. Read the conversation below. 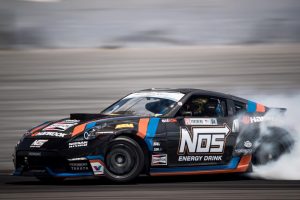 You’re a self-taught drifting driver. How did you get introduced to the sport?I first became interested in drifting when I was 16 years old. The import car scene was booming, but I wanted to do more than just be a street racer. I learned about drifting from a friend who lived in Japan. From there, I bought myself a rear wheel drive car and practiced using trial and error until I could handle my car.

Your list of accomplishments is impressive: First driver to win Formula DRIFT Champion and Triple Crown Champion in the same year. First 3-time Formula DRIFT champion. You’ve also attended every round of Formula DRIFT since 2004. What do those accomplishments mean to you?
It is hard to say what it takes to accomplish what I have over the years other than dedication. It’s not easy to dive in, and succeed, at a new discipline no matter what the sport or job is. In the end, many of us in the world have the ability to achieve great success if you apply yourself 110%.

What advantages do ODYSSEY® batteries provide over the competition?
EnerSys® manufactures an incredible list of ODYSSEY® battery models to suit every application. We can choose the right battery for the job instead of having to cram the same big ‘ol battery in the vehicle.

Just a few fun questions:
What do you do when you’re not drifting?
I do my best to ride my bicycles and stay fit.

If you could race anybody who would it be and why?
It’s hard to say, as we have raced with some of the greatest drivers in the world. If I had to choose I would say my bros from Club Loose because we always have the best time driving together!

What was your first car?
It was a 1988 Mazda RX7. I specifically bought it to learn how to drift.

What’s one thing fans probably wouldn’t know about you?
Fans probably don’t know that I truly do enjoy working on cars. Most drivers work on their cars just because they want to drive it; however, I take passion in my builds and do my best to make them stand out.