READING, Pennsylvania, June 20, 2018 – EnerSys® (NYSE:ENS), the global leader in stored energy solutions for industrial applications and the manufacturer of ODYSSEY® batteries, returns as an official sponsor of two-time rallycross champion Tanner Foust for the sixth consecutive year. He will be competing in the new Americas Rallycross Championship (ARX) series for Andretti Autosport.

EnerSys will continue its support of Foust in 2018 by supplying ODYSSEY® batteries for his racing vehicles. ODYSSEY® batteries are designed with an Absorbed Glass Mat (AGM) construction and Thin Plate Pure Lead (TPPL) technology for more engine-cranking power and reserve power than conventional batteries.

“Tanner Foust has found ODYSSEY® batteries deliver the power and reliability he needs to compete at the top levels of rallycross,” said Dave McMullen, senior director of reserve power marketing at EnerSys. “We’re proud and excited that he has chosen to have ODYSSEY® batteries as his partner for the sixth consecutive year.”

ODYSSEY® batteries feature a three- to 10-year service life and two-year storage life at 77 degrees Fahrenheit (25 degrees Celsius). They are vibration resistant and classified as “non-spillable” by the U.S. Department of Transportation.

“As a professional gear head, my job is to push the cars that I race to the limit,” said Foust. “ODYSSEY® batteries have proven instrumental in making sure we have the spark to do just that in our VW factory-built, Andretti Autosport-maintained Rallycross Beetles. Off the track, I need the same reliable power in all of my other motorized ‘offices’. ODYSSEY® batteries are the best for everything I ‘work’ in, whether that’s on road, sand, sea or in the air. How can you ask for a better partner!?”

EnerSys, the global leader in stored energy solutions for industrial applications, manufactures and distributes reserve power and motive power batteries, battery chargers, power equipment, battery accessories and outdoor equipment enclosure solutions to customers worldwide. Motive power batteries and chargers are utilized in electric forklift trucks and other commercial electric-powered vehicles. Reserve power batteries are used in the telecommunication and utility industries, uninterruptible power supplies, and numerous applications requiring stored energy solutions including medical, aerospace and defense systems. Outdoor equipment enclosure products are utilized in the telecommunication, cable, utility, transportation industries and by government and defense customers. The company also provides aftermarket and customer support services to its customers from over 100 countries through its sales and manufacturing locations around the world.

Tanner Foust is a versatile and multi-talented driver known for his supreme car control and a proven track record of podium placements, national championships and world records. He is a three-time U.S. rallycross champion (2012, 2011 and 2010) who has also won four X Games gold medals (2013, two in 2010 and 2007)and two Formula Drift championships (2008 and 2007). He has also held multiple world records including the astonishing Hot Wheels Double Loop Dare, which saw Foust drive a car through a 66-foot loop-the-loop. Foust also scored the indoor speed record for TV’s Top Gear USA, and set a distance jump record with Hot Wheels when he made a 332 foot ramp-to-ramp leap in a trick at the Indy 500 in 2011. Foust is the first American driver to win a round of European Rallycross Championship and finished both 2011 and 2012 ranked in the top three. At home, Foust has been a dominant driver in rallycross since the sport was first introduced in the United States in 2010.

Caption: EnerSys will continue its support of Foust and his 2018 racing vehicles by supplying ODYSSEY® batteries for the sixth consecutive season. 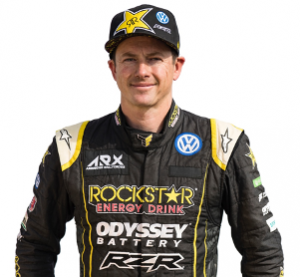